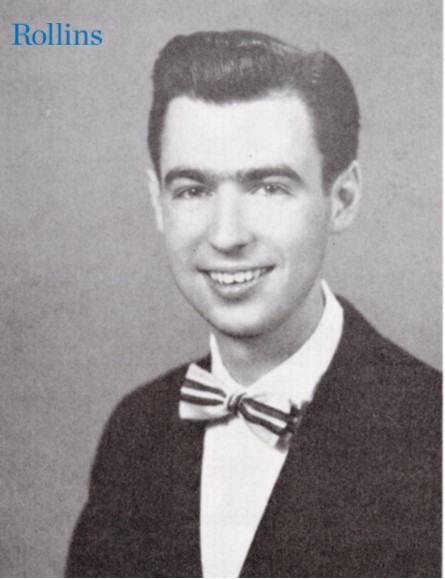 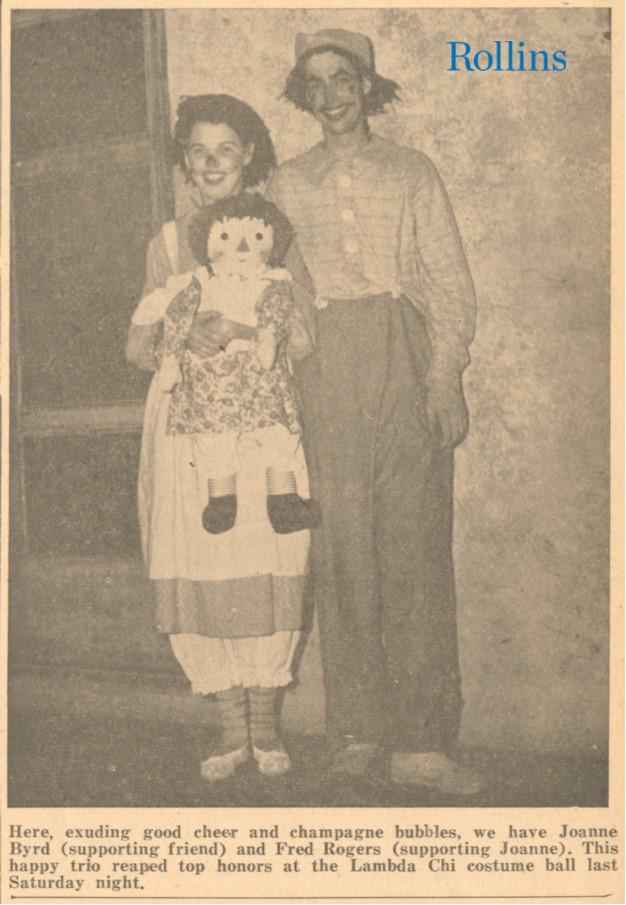 At Rollins, Fred not only proved himself a gifted and serious student in music, but also acquired and practiced his skills in performing arts. On January 29, 1949, he and Joanne won the Lambda Chi costume contest dressed as Raggedy Ann and Andy. In the following year, he was recognized as the sensational “Mystery Man” of the Independent Men’s Open House. He also appeared in several productions at the Annie Russell Theatre, where he once shared the stage with another well-known classmate, actor Anthony Perkins ’54 ’82H.

Fred McFeely Rogers ’51 ’74H, everyone’s favorite neighbor and the creator and host of the children’s television program Mister Rogers' Neighborhood, is one of Rollins’ most beloved alumni.

In 1948, 20-year-old Fred Rogers came to Rollins as a transfer student. Attracted by the strong music program of the College, he not only fell in love with the brilliant Florida sunshine, but also met Joanne Byrd Rogers ’50 ’05H, a Jacksonville native and his future wife and lifetime partner. As a member of the Key Society (Rollins honor society; by invitation only, based on scholastic achievement) and Pi Kappa Lambda (American honor society for undergraduate students, graduate students, and professors of music), Fred Rogers excelled academically and graduated with Distinction with a degree in music composition three years later. During the 1951 commencement, he received an award for composition and the General Charles McCormick Reeve Award for scholarship, which was given annually to seniors who maintained the highest scholastic record during their last three years at Rollins. 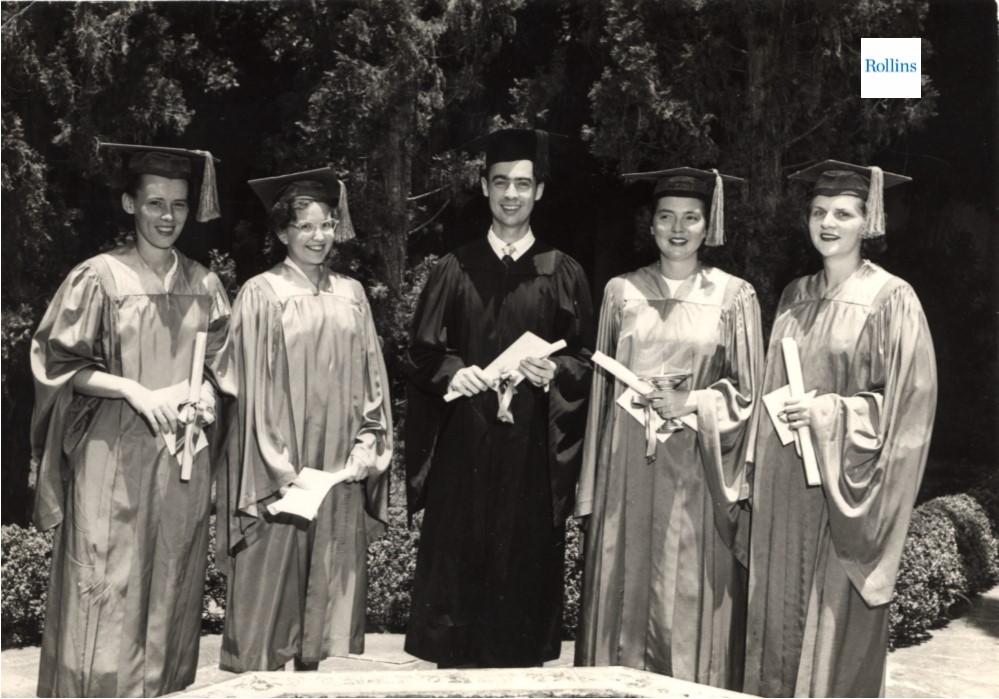 In addition to his activities in expressive arts that included the Bach Choir, Chapel Choir, and the Student Music Guild, Fred Rogers had a busy life on campus. He served as president of Alpha Phi Lambda, a new local student organization that “hopes to develop in her members self-respect and courage of conviction which they may be proud to carry forth into later life.” He was the president of the French Club and a member of the students’ Welcoming Committee, and he actively participated in intramural swimming while living on campus.

As a student leader, Fred Rogers was also the chair of the Race Relations Committee, a student group that “cooperates with the local Interracial Relations Committee in practical projects, studies and discusses the many race problems, and participates in state and national conferences.” His four-page, handwritten report documented the group’s activities in 1950-51 including: collecting and sorting books for the Eatonville community; raising funds for the future DePugh Nursing Home for African Americans; working with a local electric company to have fluorescent lighting installed at the Hannibal Square Library in the west side of Winter Park; wrapping Christmas presents for needy families; attending a cultural program at Bethune-Cookman College in Daytona Beach; and organizing the Race Relations Sunday at the Annie Russell Theatre on February 11, 1951. Life Is for Service 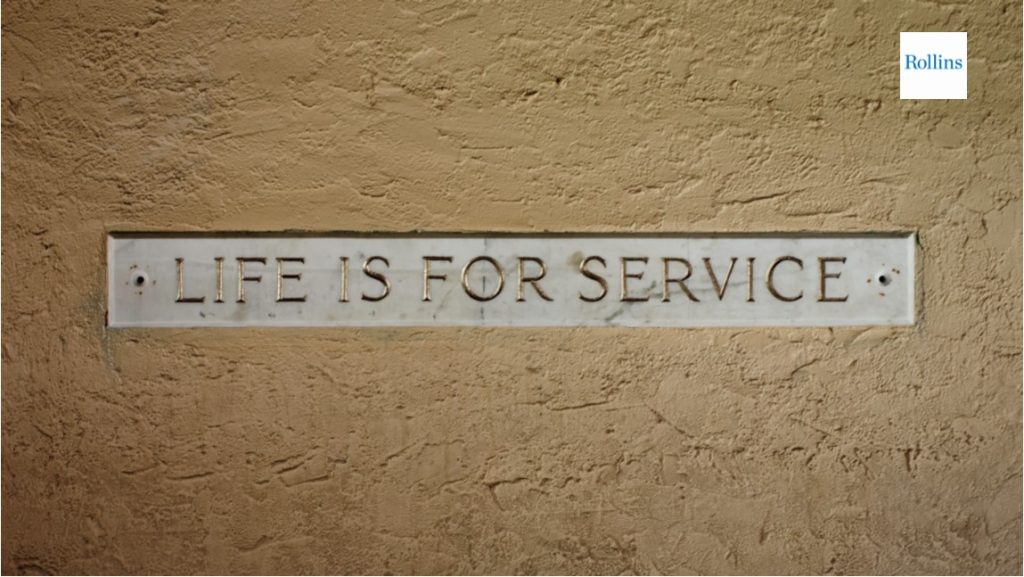 There are two marble plaques mounted since the 1930s along the covered walkway on both sides of Mills Lawn: MANNERS MAKETH MAN and LIFE IS FOR SERVICE. The first carving is by the entrance to Lyman Hall, Fred’s dormitory while living on campus. The second inscription was one of the inspirations that greatly influenced his life and career decisions, as he later carried the laminated quote in his wallet. In 1968, while reminiscing about his student years,  Mr. Rogers stated in the Rollins Alumni Record: “Everything I ever learned at Rollins has helped me in my work… So many of my particular ‘neighborhood’ at Rollins helped me to see more clearly than ever that education is a process. One learns from within not as something is superimposed from without. It takes a long time to grow. I’m glad that there are still some schools which allow their students ample opportunities for developing their own unique identities.” 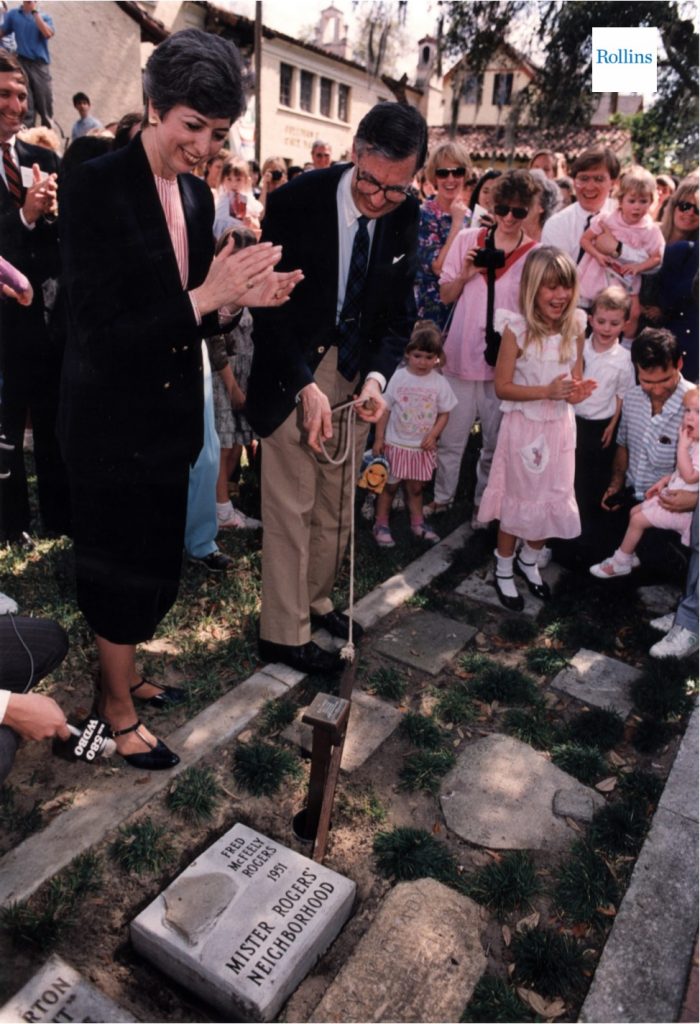 Rollins’ Walk of Fame is a semi-circular pathway around Mills Lawn and a celebrated cultural attraction lined with stones. During the 1991 alumni reunion weekend, 40 years after his graduation, Fred Rogers laid his stone in the Walk with the inscription: “Fred McFeely Rogers; 1951; Mister Rogers’ Neighborhood.” On Friday, March 8, President Rita Bornstein led the public ceremony with hundreds of children and their parents crowded around the center of campus, just outside Lyman Hall, his old dormitory at Rollins.

Hello from Your Librarian

If you have any questions or comments, please contact Wenxian Zhang